Long-listed for the 2016 Bailey’s Prize, Sara Novic’s “Girl at War” is absolutely brilliant. 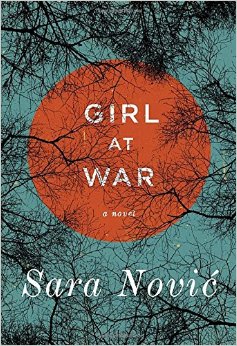 The story begins in Croatia in 1991, where Ana, a ten-year-old girl full of spirit and courage, watches as her country begins to crumble and split in a brutal (is there any other kind?) civil war. Ana faces unspeakable horrors with steely-eyed stoicism; she develops a dubious gift to stifle and subvert her trauma, speaking rarely about what she has seen.

Coming from a poor urban community, even before the devastation of war, Ana speaks of communal patterns of sharing.

“The path of hand-me-downs was a complex web that connected neighbors and strangers across the city. … In the streets we occasionally glimpsed familiar T-shirts within our circles of friends, though we had an unspoken agreement not to mention it. On the weekends we spent our mornings scrubbing the stains from our new old clothes, wringing out each other’s memories.”

Is this Novic’s answer to Chekov’s gun? In the nadir of her young life, fresh from unimaginable horrors, Ana clings to her own blood-stained T-shirt, retrieving it again and again from caring adults’ attempts to scrub away its stories.

“The sandbags were supposed to be strongholds we could stand behind and shoot from if the Serbs came to capture us. But instead of a sense of safety, the barricade imparted an air of naïveté. It was as if we believed a flood of tanks was like a flood of water and could be stopped by a pile of sacks. It was as if we’d never seen the footage of the tank plowing over the little red Fico in the streets of Osijek, of an army truck crushing a passenger bus into a ditch on the side of the road. It was as if it never occurred to anyone that blocking the incoming roads was the same as blocking the escape routes.”

It seems that Zagreb’s naïveté is echoed in Ana’s own denial. She wills herself to suppress her memories – as though denial will erase their truth – only to be haunted by them, tormented in her sleep, and never at peace in her skin. She has built up walls of her own which do nothing to prevent the atrocities she must face and seem only to keep her tightly bound by her trauma.

Ana’s criticisms of war spectators is pointed, honest, and striking. She speaks of “journalists, a breed of people I still couldn’t understand. Outsiders who claimed the moral high ground, then stood back and snapped photos during encounters with bloodied children.”  But it isn’t just journalists who confound and dismay her. Living in America – in New York City, no less – through 9/11 and the ensuing wars, Ana (and perhaps Novic herself?) is struck by the difference, the way in which the majority of Americans are not even spectators, but oblivious bystanders.

“The country was at war, but for most people the war was more an idea than an experience, and I felt something between anger and shame that Americans – that I – could sometimes ignore its impact for days at a time. In Croatia, life in wartime had meant a loss of control, war holding sway over every thought and movement, even while you slept. It did not allow for forgetting. But America’s war did not constrain me; it did not cut my water or shrink my food supply. There was no threat of takeover with tanks or foot soldiers or cluster bombs, not here. What war meant in America was so incongruous with what had happened in Croatia – what must have been happening in Afghanistan – that it almost seems a misuse of the word.”

War is and always will be a treacherous, thorny, and devastating topic. When presented through the eyes of a child, as Novic has done masterfully here, it is wrenching. And Novic has chosen not just to present war through the eyes of a child, she has made that child a participant in the war. Ana is not peripheral to nor a passive victim of this brutality; she is a Girl at War.

There are many adjectives that can easily be pinned to Sara Novic in a effort to sum her up demographically: young, female, Croatian-American, deaf. These descriptors, in my mind, are remarkable and worth mentioning, but I am going to consider them “bonus points”. Her writing, as evidenced by this extraordinary debut, stands on its own. She writes with extraordinary calm about incalculable chaos. Sara Novic is a stunning talent and her presence in this art is portends great things for its future.