“All is suffering is a bad modernist translation. What the Buddha really said is: It’s all a mixed bag. Shit is complicated. Everything’s fucked up. Everything’s gorgeous. Even Death contains pleasure – six feet below understanding.” 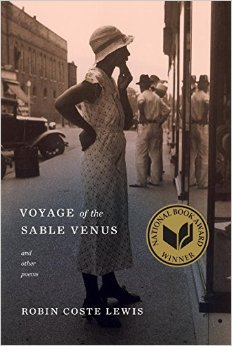 Robin Coste Lewis’s newest volume of poetry is sometimes ethereal and other times murky  and dark. Her poems are about humanity and spirit and overwhelmingly about race. Lewis pulls no punches, and her lines are full of anger and anguish: “So how do you call that body born colored and male, hunted and used for cog and prey? Tree adornment? Altar cloth? War fodder?”

One poem – Felicite – is part confessional, in which the narrator summons her courage and reveals her family’s deepest secret.

“Tonight, after twenty-five years, /  I realized I’ve spent my entire life / avoiding any situation /  that might require me / to say these words aloud. / From that moment / I discovered her rotting inside / a molding courthouse, her signature / next to the plantation’s inventory, / I began to babble / any words I could think of / in four different languages, / placing them in the most chaotic order / possible, in order / not to say these words: / The black side of my family / owned slaves.”

In the titular poem “Voyage of the Sable Venus” Lewis has undertaken a remarkable, modernist feat. She has collected and arranged “the titles, catalog entries, or exhibit descriptions of Western art objects in which a black female figure is present, dating from 38,000 BCE to the present”. What follows is a poem that is striking in its rhythms and repetitions,  stark in its sparse words. I appreciated the concept, and I was affected by how many of the descriptions and titles were seemingly about objects, lacking human features or recognition that the subjects were people and not things.  Unfortunately, I felt that the poem would have had greater force, perhaps, as a visual exhibit covering significant square footage. As a series of more than 60 pages, the intended force of the poem waned, as did my attention.

All told, Robin Coste Lewis has presented her readers with a powerful collection of poems that as carefully shaped as a bonsai tree and as imbued with meaning as a red rose. Her voice is irresistible and irrefutable, and her book well-worthy of the National Book Award it earned.