“She loved the weightless lift of takeoff, the earth dropping away and spreading out below, the bunting of clouds, the sun appearing like a gift. She misses it that lightness she once felt at thirty-six thousand feet, the substance of her life below as unreal as the vanished earth beneath the strange cloud sea. But now she knows she’d mistaken the illusion of lightness for possibility. She’d thought that if you kept moving forward you could leave the past behind.” 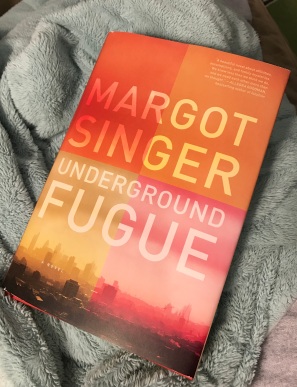 Esther has fled her job, her home, and her failing marriage in New York to care for her dying mother in London. Ever since her teenage son died suddenly three years ago, life has slowly unravelled for Esther; her mother’s decline is a sad but welcome distraction. While she and her mother have never been terribly close, their quiet solitudes blend fairly smoothly as the end of Lonia’s life approaches.

“All these years, her mother has lived alone. Perhaps she too is like a mollusk, her losses calcified insider her, iridescent, out of sight. There are so many things she never speaks of: her childhood, the war, her husband’s death. If she’s lonely, she’s kept it tucked away. Her mother chews her toast, swallows, her face a crinkled shell. The silence hangs between them like a weight. Esther sighs and takes another piece of toast. If only you could tell which moment would be the last.”

Esther has built walls out of her tragedy and grief, isolating herself and floundering to discover who she is anymore. Her struggle for any sense of self and purpose after having suffered such an untenable loss is quiet and deeply affecting. At this stage, nearly three years after her son’s death, Esther is believably undone, simply a shadow of her former self but resisting hyperbolic gestures and dramatic mourning. A former piano student, Esther sees parallels in the construction of fugues, in particular, to her experience of life.

“The music explodes in climax, draws back to a ripple, whispers, sings. The theme and countertheme return again and again. They are the same each time and yet completely different, just as she is always both herself and not herself in each successive instant, no longer a small girl living in England, no longer a wife or mother, no longer even the same woman she was fifty-seven minutes earlier that very afternoon. She too has circled through the variations and returned to where she started to find that it has changed.”

Next door to Esther’s dying mother lives Javad, a neuroscientist and researcher who emigrated to London from Iran three decades earlier, and his 19 year old son, Amir. Javad’s story – first in the structure of the novel and eventually in life – is intertwined with Esther’s. Javad struggles to know is increasingly enigmatic son, a boy who keeps to himself and has taken to disappearing late into the night. Amir, we learn, has taken up urban exploration, rappelling into or scaling up abandoned architecture – defunct underground tunnels, obsolete towers, and desolate warehouses – throughout London.

“He’s lived in London his whole life, but this is a whole other world: gritty, dirty, real. It’s like that storm drain or manhole you’ve walked over a thousand times but never noticed until you knew where to look. Everything is multiple. It is strange. Even his own face, reflected in the bathroom mirror, seems a doppelganger of his former self.”

Amir sees great beauty and peace in this decrepit, hidden side of London, a town he has inhabited his whole life but one from which he may always feel separate, other. Nevermind teenage angst, Amir’s otherness is reinforced by the city around him, one that sees him as a foreigner, a Muslim. Javad, too, is acutely aware of this struggle for place, particularly in today’s hyper-vigilant, increasingly xenophobic world. He aches aver how his son is treated by his fellow citizens.

“But the brain, as he knows well, was hardwired for prejudice and suspicion. Human beings were predisposed to perceiving meaning in coincidence, to seeing outsiders as threats. And he was an outsider. A foreigner with a hard-to-pronounce name – worse, a Muslim from the Middle East. The fact that his son was born in London of an English mother didn’t matter. People looked at blokes like them and they saw what they expected to see.”

“Underground Fugue” is a rather quiet book, full of introspection and personal guards. In this, her debut novel, Margot Singer explores alienation, loss, prejudice, and sense of self, and her explorations feel open and inconclusive in a positive sense. Singer is toying with the unknowable, with our inner fears and our ever-changing psyches. Her purpose is not to define or prescribe; the journey is the thing, and that journey is muted, honest, and diverting. “Underground Fugue” is a promising debut for a talented writer.

Thank you to Melville House for providing a complimentary Advanced Review Copy in exchange for a fair and honest review.