“Since starting college, I hadn’t admitted to anyone that my mother had cancer. I didn’t want anyone’s pity. My classmates and I theorized enthusiastically in class about the AIDS movement, and how disease had taken the place of dictators in postcolonial Africa. I could not admit to my friends that my family was benefiting so heavily from First World wealth. They thought that in Africa we lived in huts and played with elephants. I did nothing to disabuse them of that notion. Dirty and inconvenient, AIDS was a disease of the people, I thought. Cancer, to me, was the opposite. Its cause was endorsed and healthily sponsored.
But I never admitted to my mother what I thought of her disease, that thing she lived with day and night, that was more present to her than us, than even God. Unlike family or faith, her disease was something she had never chosen. When I came close to telling her, I remembered that, and it rendered me silent.
What I felt was extremely uncomfortable, and she would have resented me for it; as much as she suffered, many other people were suffering worse. Her disease only reinforce how the world saw us: not black or white, not American or African, not poor or rich. We were confined to the middle, and would always be. As hard as she tried to separate herself from the binds of apartheid, we were still within its grip. It had become the indelible truth of our lives, and nothing – not sickness, not suffering, not death – could change that.” 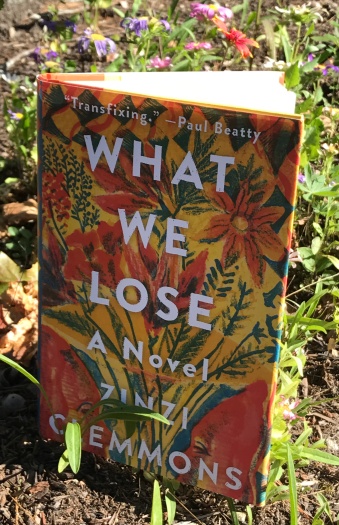 I am blown away by debut novels that are complex, confident, and cultivated, novels which belie the writer’s experience and which demonstrate a maturity and polish well beyond their author’s years. “What We Lose” may be the quintessential example of a such a debut.

Thandi is a young woman coming of age in Pennsylvania, a self-proclaimed ‘light-skinned black woman’ who feels dispossessed.

“I’ve often thought that being a light-skinned black woman is like being a well-dressed person who is also homeless. You may be able to pass in mainstream society, appearing acceptable to others, even desired. But in reality you have nowhere to rest, nowhere to feel safe. Even while you’re out in public, feeling fine and free, inside you cannot shake the feeling of rootlessness. Others may even envy you, but this masks the fact that at night, there is nowhere safe for you, no place to call your own.”

Much of Thandi’s childhood, and even her young adulthood, is about trying to establish a place, to forge a path, to find a community. Thandi is introspective, independent, and often isolated. When her mother – a woman who has always been both distant and yet reliable, a woman who rarely interferes but invariably catches Thandi when she falls – is diagnosed with terminal cancer, Thandi’s lifelong yearning for comfort and her maturing sense of self are challenged. Her mother’s eventual death is the emotional, pivotal moment one might expect.

“I realized that this would be life; to figure out how to live without her hand on my back; her soft, accented English telling me Everything will be all right, Thandi. This was the paradox: How would I ever heal from losing the person who healed me? The question was so enormous that I could see only my entire life, everything I know, filling it.”

This character novel is sprinkled with artifacts – newspaper clippings and photographs from concurrent world events – which, while not directly part of the narrative thread, advance and embellish the story. Clemmons’ use of these excerpts is creatively and subtly done with a delicate, editorial hand. The surrounding narrative of “What We Lose”, the inner thoughts and outer struggles of Thandi, is meditative; it is thoughtful and evocative, expertly balancing heartache with hope. Zinzi Clemmons has created an autobiographical first novel that abuts perfection.

1 thought on ““What We Lose” by Zinzi Clemmons”