Every February I find myself somehow taken by surprise by my overwhelm. Winter’s endless dark, life’s continuous pressures, the world’s relentless disasters, racism’s shameless presence. These forces are predictable, intractable, and irrepressible, as is, it seems, the anxiety that ratchets up to a dangerous hum every February and dares me at every turn to stay the course. And so, it has been a month without writing, but not one without reflection. Many of the volumes I’ve read this month, though, demand attention, and so I wade back into the writing waters, starting first with two absolute treasures.

These two collections of poetry – slim volumes that will crack you wide open – fit perfectly my mood and my focus. Danez Smith and Clint Smith (no relation) are both relatively young black men whose voices are unflinching, unwavering, and irresistible. Both collections feature poems that are alternately personal and political, some which are the length of a breath and others which traverse numerous pages. I feel unequal to offer either much critique other than to say that both poets seem fueled by a mystical well of eloquent rage and soul-shaking composition. Below are a few selections chosen to represent these astounding collections.

Selections from “Don’t Call Us Dead” by Danez Smith 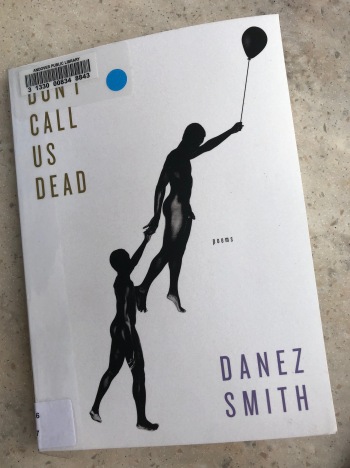 somewhere, a sun. below, boys brown
as rye play the dozens & ball, jump

in the air & stay there. boys become new
moons, gum-dark on all sides, beg bruise

-blue water to fly, at least tide, at least
spit back a father or two. i won’t get started.

history is what it is. it knows what it did.
bad dog. bad blood. bad day to be a boy

color of a July well spent. but here, not earth
not heaven we can’t recall our white shirts

turned ruby gowns. here, there’s no language
for officer or law, no color to call white.

we say our own names when we pray.
we go out for sweets & come back.

paradise is a world where everything
is sanctuary & nothing is a gun.

i’ve left Earth in search of darker planets, a solar system revolving too near a black hole. i’ve left in search of a new God. i do not trust the God you have given us. my grandmother’s hallelujah is only outdone by the fear she nurses every time the blood-fat summer swallows another child who used to sing in the choir. take your God back. though his songs are beautiful, his miracles are inconsistent. i want the fate of Lazarus for Renisha, want Chucky, Bo, Meech, Trayvon, Sean & Jonylah risen three days after their entombing, their ghost re-gifted flesh & blood, their flesh & blood re-gifted their children. i’ve left Earth, i am equal parts sick of your go back to Africa & i just don’t see race. neither did the poplar tree. we did not build your boats (though we did leave a trail of kin to guide us home). we did not build your prisons (though we did & we will fill them too). we did not ask to part of your America (though are we not America? her joints brittle & dragging a ripped gown through Oakland?). i can’t stand your ground. i’m sick of calling your recklessness the law. each night, i count my brothers. & in the morning, when some do not survive to be counted, i count the holes they leave. i reach for black folks & touch only air. your master magic trick, America. now he’s breathing, now he don’t. abra-cadaver white bread voodoo. sorcery you claim not to practice, hand my cousin a pistol to do your work. i tried, white people. i tried to love you, but you spent my brother’s funeral making plans for brunch, talking too loud next to his bones. you took one look at the river, plump with the body of boy after girl after sweet boi & ask why does it always have to be about race? because you made it that way! because you put an asterisk on my sister’s gorgeous face! call her pretty (for a black girl)! because black girls go missing without so much as a whisper of where?! because there are no amber alerts for amber-skinned girls! because Jordan boomed. because Emmett whistled. because Huey P. spoke. because Martin preached. because black boys can always be too loud to live. because it’s taken my papa’s & my grandma’s time, my father’s time, my mother’s time, my aunt’s time, my uncle’s time, my brother’s & my sister’s time . . . how much time do you want for your progress? i’ve left Earth to find a place where my kin can be safe, where black people ain’t but people the same color as the good, wet earth, until that means something, until then i bid you well, i bid you war, i bid you our lives to gamble with no more. i’ve left Earth & i am touching everything you beg your telescopes to show you. i’m giving the stars their right names. & this life, this new story & history you cannot steal or sell or cast overboard or hang or beat or drown or own or redline or shackle or silence or cheat or choke or cover up or jail or shoot or jail or shoot or jail or shoot or ruin

this, if only this one, is ours.

Mom said that my
head was big because I needed enough
room to read all the books in the library,
which seemed like infinity, even though

I didn’t really know what infinity meant,
but I had heard my teacher say it once
when she talked about the universe
& books felt like the universe to me.

Ode to the Only Black Kid in the Class

You, it seems,
are the manifestation
of several lifetimes
of toil. Brown v. Board
in the flesh. Most days
the classroom feels
like an antechamber.
You are deemed expert
on all things Morrison,
King, Malcolm, Rosa.
Hell, weren’t you sitting
on that bus, too?
You are everybody’s
best friend
until you are not.
Hip-hop lyricologist.
Presumed athlete.
Free & Reduced sideshow.
Exception & caricature.
Too black & too white
all at once. If you are successful
it is because of affirmative action.
If you fail it is because
you were destined to.
You are invisible until
they turn on the Friday
night lights. Here you are-
star before they render
you asteroid. Before they
watch you turn to dust.