“These humans, they don’t believe in anything anymore, besides capitalism, of course. Times are good, people are thriving, sickness has been eradicated, and machines do all the menial work. There hasn’t been a real war in decades, and the only place oppression and injustice are found is in the dictionary.
It’s merely a façade, sweet delusions of happiness despite their mediocrity. How can they know true pleasure without pain? Happiness without suffering? Basos and ire, each incomplete without the other.”

It is the not so distant future, in a world where bots are as commonplace as smart phones and human ‘advances’ threaten humanity. In the heart of South Africa, a powerful new drug infiltrates the masses, bringing florid hallucinations and releasing untapped potential in many of its users. When a scheming, blood-thirsty demigoddess plots to overthrow the current world order and re-establish herself in the pantheon, a few brave humans must fight to save all of mankind.

Sound… odd?? “The Prey of the Gods” is, on the surface, indeed quirky. Robots, 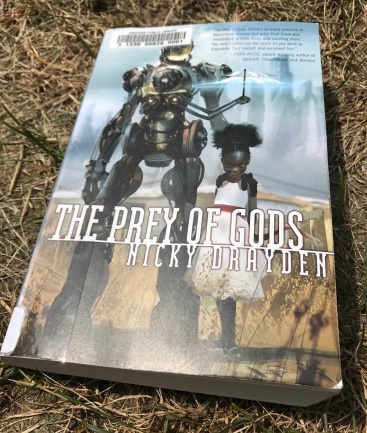 hallucinations, demigods – it’s a lot to take in. But damn if this isn’t gripping speculative fiction that, despite its clear roots in fantasy and science fiction, is a deeply human tale that captivated a reader who is heavily biased towards literary fiction and who tends to shy away from the worlds of fantasy. Were I not embracing the challenge of reading harder – seeking diverse voices and expanding the genres in which I am comfortable –  “The Prey of Gods” would not have been likely to land on my TBR; that would have a been a terrible loss.

Nicky Drayden builds her debut novel around several key characters, including Nomvula a young, neglected girl with unrealized godhood; Sydney, a vengeful demigod seeking her ascendency; Councilman Stoker, a closeted trans-woman forced into political life by his/her ambitious mother; Muzi, a gentle teenager in love with his best friend; and Riya Natrajan, a self-made superstar in a constant battle with physical and emotional pain. These characters share the stage and the narrative, but they maintain a firm grip on your attention. They are, with the exception of Sydney (who is a perfect storybook villain), deeply good and charismatic. For instance there is Nomvula, who wants to use her blossoming powers to save humanity and who struggles to come to an inner balance of good over evil.

“‘I want you to know this, Nomvula. Even if you have nothing but good in your heart, you will fail. You will hurt people from your actions. Weep if you must, but do not let your failures define you.”

Then there is Muzi, in a simultaneously textbook and yet extraordinary struggle over identity and self, who doesn’t know who he is culturally and is unable to admit who he is sexually. After Muzi uses the new drug “Godsend”, he is suddenly able to control people’s minds, but the cost is that he must then live out each person’s worst memories and hurts.

“Muzi exhales, then lets his head drift to his knees. He needs to grieve – for a hamster crushed by carelessness, for a young life lost in a bathtub, for the secret past of a poacher thought left forever behind, for another fifty-some odd incidences of cruelty and misfortune that befell teammates and strangers. And for his friend, who he keeps hurting, huddled in the corner. He grieves for each one, hoping to forget, knowing he will not.”

“The Prey of Gods” is a classic tale of the struggle of good versus evil, of the balance between advancement and annihilation, but with plot twists and characters breathtakingly original and new. Drayden’s writing is fast-paced and dizzying. Her imagination leaves you breathless, and her characters’ innate goodness and the story’s moral are surprisingly and enduringly heartwarming. Whether or not Sci-Fi and Fantasy is your bailiwick (and I would never say it is mine), this book is a fantastic and worthwhile read.

“If you only knew your true potential, you’d understand why I’m doing this.”

The demon swoops down through a crowded street. Screams ring out in chorus.

“The flock needs to be culled, the weak disposed of and the strong taught how to tap into the gifts they’ve been denied. Mediocrity can no longer be tolerated.”

And with that, she lets out a whistle, and the Zed hybrid beasts break formation and plunge directly into the crowd.

It’s July, officially summer – at least in my part of the world. My garden is finally abloom, the vegetables are starting to sprout, and my To Be Read list grows with each summer storm. With the days of heat-inspired laze ahead, I’ve decided to embark on a mini-project: I will spend this month reading books I’ve borrowed through my local library system. I have always been a faithful library patron and am eternally grateful for the existence of public libraries. Why not celebrate that dedication, in my own bookish way, by featuring the variety of gems at my disposal?

I combed through my Goodreads hopefuls, fired off a bevy of requests, and found that my eyes may be bigger than my proverbial stomach, but I am very excited at the menu ahead. Here is my tax-supported, publicly available, library book haul: 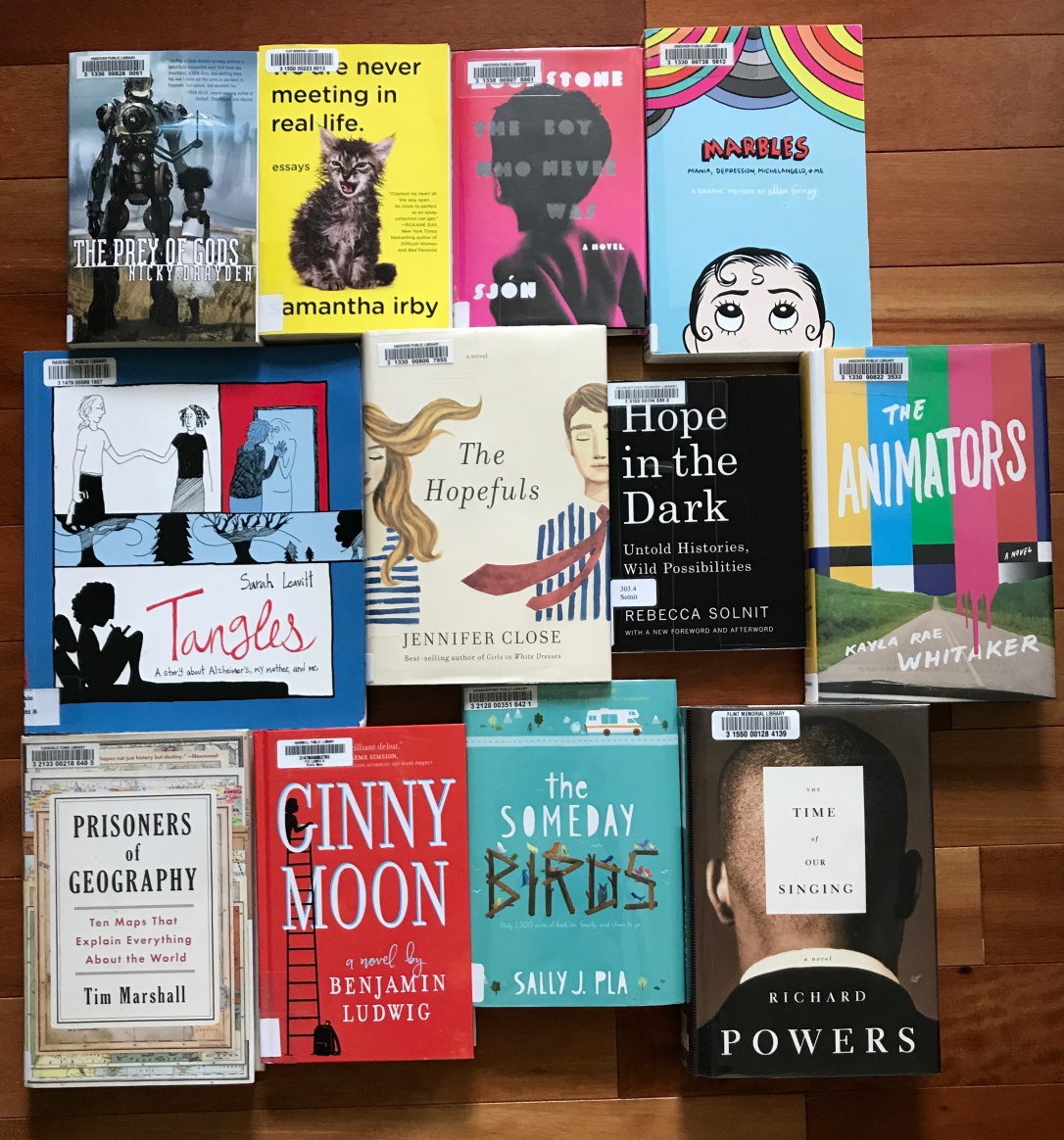 I’ve gathered a nice variety of genres and topics, lengths and formats. There are graphic novels, memoirs, essays, literary fiction, sci-fi, works in translation. There are brief novels and weighty tomes. I know, too, that there are missing elements – better representation of people of color, immigration, historical fiction, poetry. These are areas I try to cover with decent regularity, so I will acknowledge the lack and commit to addressing it again in the months ahead. And who knows? Perhaps I’ll have a highly prolific reading month and can add better representation to this month’s project. Whatever comes, I hope to give my library card and my creaky brain a good July workout. Hope you’ll enjoy the journey with me!