“‘The thing to remember about love affairs,’ says Simone, ‘is that they are all like having raccoons in your chimney.’
‘Oh, not the raccoon story,’ groans Cal.
‘Yes! The raccoons!’ cries Eugene.
I’m sawing at my duck.
‘We have raccoons sometimes in our chimney,’ explains Simone.
‘Hmmm,’ I say, not surprised.
‘And once we tried to smoke them out. We lit a fire, knowing they were there, but we hoped that the smoke would cause them to scurry out the top and never come back. Instead, they caught on fire and came crashing down into our living room, all charred and in flames and running madly around until they dropped dead.’ Simone swallows some wine. ‘Love affairs are like that,’ she says. ‘They are all like that.'”

This collection of short stories was my first exposure to Lorrie Moore, and I am smitten. 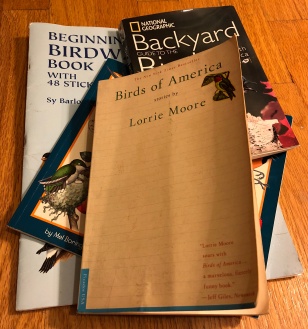 Her stories are packed with sardonic characters wielding razor-sharp wit. Many of Moore’s characters are the fast-talking, bon-mot-laying people to whom I am irresistibly drawn in fictional worlds as well as in reality (though honestly their hyperbolic wit more frequently populates books and television than real life). I have read criticisms, in fact, of this very characteristic of Moore’s writing, but to me it is its greatest asset.

“Birds of America” is full of sassy witticisms about love and relationships, with each ill-used or unsettled woman more biting than the last. The following excerpts, from three different stories, may provide a taste of what Moore is serving – marriage, roasted on a spit.

“At night, she and Joe did yoga to a yoga show on TV. It was part of their effort not to become their parents, though marriage, they knew, held that hazard. The functional disenchantment, the sweet habit of each other had begun to put lines around her mouth, lines that looked like quotation marks – as if everything she said had already been said before.”

“Marriage, she felt, was a fine arrangement generally, except that one never got it generally. One got it very, very specifically.”

Despite the rather dim view and the often doomed-status of relationships throughout these stories, “Birds of America” isn’t at all discouraging or disheartening. There is levity in every story, a glimmer in every eye, and a snicker waiting to break free on every page.

“We are in the year of racial, religious, and ethnic mildew. ‘Negro’ families in Montclair, New Jersey; Brookfield, Massachusetts; Hartford, Connecticut; Mount Vernon, New York; Washington, D.C. – the hidden enclaves of the Black Bourgeoisie (a book that will be taken down from the dusty shelves of some obscure small-town library and soon issued in paperback, causing the fortunes of an obscure ‘negro’ sociologist to rise – will see their children abandon a lifetime of de-ghettoizing. Their sones will go to jail for freedom (which in their parents’ minds is no different from going to jail for armed robbery, heroin addiction, pimping, and other assorted ethnic hustles). Their daughters will kneel in prayer on the dusty red-clay roads of Georgia, as if the neat velvet pews of the Episcopal Church had never been their first encounter with religion. The ‘First Coloreds’ in medicine, law, politics, baseball, education, engineering, basketball, biochemical research, the armed services, tennis, and film production will all be asked to come forward and speak about their success. Ralph Bunche will become a household name. Everyone who is anyone will find at least one ‘negro’ to bring along home for dinner. It’s the year of the human being. It’s 1963: Whatever happened to interracial love?”

In 2016, nearly 30 years after her death, Kathleen Collins’ poignant, theatrical short stories were published under the title “Whatever Happened to Interracial Love?”. Collins, who was known for her work as an activist and filmmaker in the 60s and 70s, wrote honest, simple stories about love, sex, and family, all with an eye to race and racism. Whether developing characters with stereotypically cavalier attitudes towards family responsibility, such as the characters in “Interiors”:

or satirizing assimilationists’ racist views in “Stepping Back”:

“I’m not trying to flatter myself, but I was the first colored woman he ever seriously considered loving. I know I was. The first one who had the kind of savior faire he believed in so devoutly. The first one with class, style, poetry, taste, elegance, repartee, and haute cuisine. Because, you know, a colored woman with class is still an exceptional creature; and a colored woman with class, style, poetry, taste, elegance, repartee and haute cuisine is an almost nonexistent species. The breeding possibilities are slight.
I myself have never known another one like me, not one with my subtle understanding of art, music, drama, food, people, places, ambience, climate, dress, timing, correctness . . . whatever. As if all forms of cultural underdevelopment had somehow passed me by.  As if I took my racial heritage (so to speak) and molded it to my spirit . . . Then I emerged out of my cocoon like some new breed of butterfly.”

Collins is sharing an important point of view that, though cloaked in the culture and language of the 70s, is relevant and resonant today. Each vignette is carefully crafted and thoughtfully brief. Her tone and characters are reminiscent of James Alan McPherson’s “Elbow Room”, a contemporaneous collection of short stories which won the Pulitzer Prize in 1978. The reading public was deprived of Collins’ writing for decades, and her reputation and renown no doubt suffered for that. The discovery and publication of this brilliant little collection of stories is a gift which will hopefully win Kathleen Collins belated but much deserved praise and respect.