“Mykola had stuck with the nervous, the reluctant like himself among the newly recruited, until he’d learned that another man’s fear was nothing to trust in. Give the fearful a knife or a rifle, they will use it; in the midst of the fray, give them a flame, they will lay waste.”

Novelist Rachel Seiffert takes her readers into an eerie, quiet landscape of fear and flight. 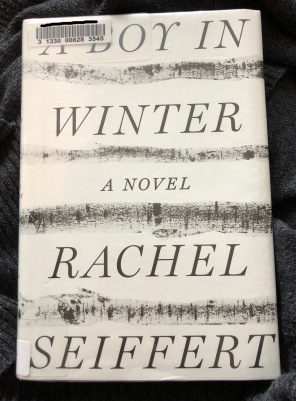 It is 1941 and the SS has just invaded a small town in rural Ukraine. As the German soldiers brutally round up and quickly slaughter the area’s Jewish residents, “A Boy in Winter” flits back and forth across the stories of four characters, with two carrying thing majority of the narrative.

There is Otto Pohl, a German engineer tasked with building a road through the area for the Nazis. Pohl is a reluctant participant in the Nazi cause, but he is complicit all the same. His narrative focuses primarily on his inner dialogue, including the things he wishes he could say to his wife to justify his collusion.

“It is a road for when this war is over. No more tans will have to roll then. Pohl has told Dorle this, over and over – in his thoughts this time, not in his letters to her: that would be too dangerous. It is for when Hitler loses, as he surely must, my love. Just look at all his over-reaching madness – the man means to conquer Russia now: I ask you! It can only be a matter of time. Still aware of her soreness, and how his letters can do little to soothe it, Pohl has assured her repeatedly – even if only inwardly – that he has come to build a road here, good and broad, and fit for civilians. Fit for civilisation, not some thousand-year abomination. And even if he’d sooner tell her in person, it has still eased him to say these things.”

There is also Yasia, a young woman from the farmlands who has come closer to town seeking to reclaim her lover from German recruiters. Finally there are Ephraim, a father rounded up with his fellow Jews, and Yankel, a young boy with a superhuman will to survive.

“There are a dozen SS around him – hounding him, hounding his mother – and there are still others beyond them: they seem to fill the small town’s streets and alleyways. So many more than he thought; the schoolmaster had not anticipated even nearly so large a force. But now he is run past whole packs of soldiers, of policemen crowded at the corners, standing wide-legged at the house doors and pounding.
If he had only known this.
That soldiers would come hauling people out of their houses.
That police would come looking in such numbers. For any who refused to comply with the instruction.”

Unlike most World War II era/holocaust atrocity-centered stories I’ve read, “A Boy in Winter” deals more with the impact on the people and places ‘incidental’ to the invasion, rather than focusing expressly on its most obvious victims. In some sense, this novel felt a bit like the embodiment of the Martin Niemöller quote “First they came for the socialists…”. Seiffert is exploring the roles of the towns and villages invaded by the Nazis, unpacking the part so many played as they backed into a corner, averted their eyes, and felt compelled to save themselves and not risk standing up for their neighbors. “A Boy in Winter” is a novel about guilt, but also about hope. It is about those extraordinary few who couldn’t bear to turn away, whose human instincts won out over fear and self-preservation.

“A Boy in Winter” is written in cold, simplistic language; it is awash in grays. I haven’t read anything else by Seiffert, so I cannot speak to whether or not this is her typical ‘voice’, but I can say that in my mind, it was exactly the right tone for a story of cold despair, of shuttered doors and cloaked neighbors, and of ultimate terror.

“‘You must understand,’ Saw Lay explained as he and Benny walked one evening in April. ‘The loyalist bond we share with the Brits … what made it stick was our mutual security. Their takeover of the country wasn’t easy. It happened over time, with several wars. We welcomed them because we’d been persecuted by the Burmans for centuries, we’d been their slaves – our villages perpetually attacked, our people perpetually preyed upon, stripped of everything from our clothing to our lives. This is a reason that we are characteristically afraid. Our tendency to be shy, to be modest, to avoid confrontation, to be cautious – all of this comes from our long history of being intimidated. And the Brits, well, they made use of that history. It didn’t hurt that we populated strategic territory. It behooved them to make nice with us, as they say. And, well, it behooved us, too.'” 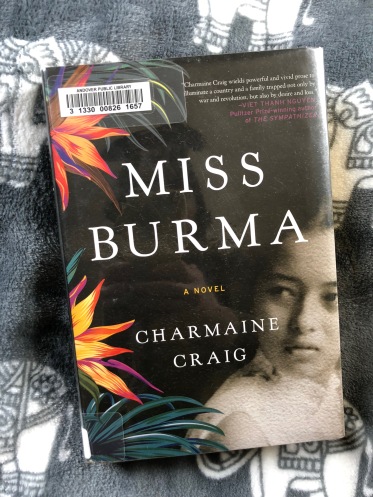 I’ll fully admit to being woefully ignorant of Burma (now Myanmar) and its complicated history of ethnic conflict and colonization, a fact which made my reading of “Miss Burma” by Charmaine Craig all the more important and enlightening. “Miss Burma” is the story of Benny, a Burmese man of Jewish and Indian descent, and his wife Khin, a striking young woman from among one of Burma’s ethnic minorities, the Karen. Khin and Benny speak no common language; they are both virtually alone in the world and both adrift in a country that is at once home and hostile.

“It wasn’t that this rabbi had spoken to her as a Burman might; anytime a Burman engaged with a Karen, it was with the posture of superiority – intellectual, spiritual, racial. No, this rabbi hadn’t condescended to her, but had treated her as something alien. He was fighting to preserve his people in a country, it so happened, that was ceaselessly obliterating hers. And she saw that much as she wanted to find someplace to take root with Benny, she would never not be a lost Karen. She would never not be wandering in the desert, homeless, unwanted – except by some of her own. Except by equally rootless Benny.”

Beginning in the late 1930s, “Miss Burma” follows this young couple through decades of struggle and conflict. Burma is fighting both global threats of imperialism – Britain, Germany, Japan – and endless internal ethnic conflict, dominated by the asserted supremacy of ethnic Burmans – “to be Burmese – meaning to be one of Burma’s natives – but not to be Burman was, in Burman terms, to be distinctly undesirable.” Benny and Khin, too, in their own ways, fight for a place in their country, for the safety of their people, and for a secure sense of home neither has ever truly known.

Craig’s writing is sometimes spare, often vivid, and always visceral. From the fecund forests through which Khin and her children must flee to the graphic and inhumane torture Benny and others face at the hands of various militant groups, Craig’s writing had me covering my eyes, unable to resist reading between my fingers. Like its main characters, “Miss Burma” is deceptively soft-spoken, a mildness which thinly disguises its strength and unbending will. With its under-celebrated subject matter and its understated tone, “Miss Burma” is an excellent addition to the Women’s Prize Longlist and a strong contender for the 2018 prize.