“Why on earth did I ever choose this city that is so viciously cruel to me? This Rio de Janeiro, which conceals its sharp, pointy teeth behind its carnival masks, and envelops my very self in its crimson cloak, woven fiber for fiber of human pain…? There is only one thing for which we abandon safe waters and cut off our roots. Only one thing, for which Adam rejected immortality: THE UNKNOWN.” 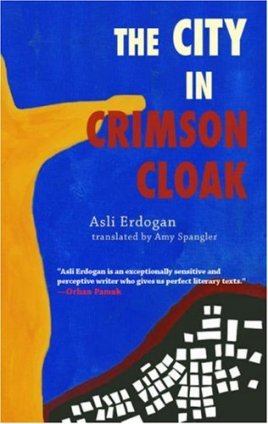 Asli Erdogan, a Turkish writer, has created a seemingly autobiographical portrait of a young Turkish writer caught in the demonic undertow that is Rio de Janeiro. Özgür has come to Rio to write, intending to stay for a summer but instead staying for years. Her relationship with Rio – a city of constant danger and interminable darkness – is much like a junkie in the throes of addiction. Özgür is starving and unhinged; she vacillates between isolating herself in her slum apartment and brazenly inserting herself in perilous situations.

“Here I am in this semi-savage land, all alone, an unfamiliar feeling of being both free and besieged brewing within me. (Lonely, alone, derelict, vagrant, orphaned…I can list any number of adjectives, but I cannot build a bridge between words and reality.) The absolute, impeccable, infernal freedom of having not a single person who needs me, or anyone looking after me…I can brandish the lies of my choice, fabricate the past that I long for, pursue the most sinful of fantasies.”

Throughout this infernal novel, the story alternates between a day in the dystopian life of Özgür and excerpts from Özgür’s unfinished novel, also called “The City in Crimson Cloak.” The stories are deeply synchronous and intertwined, a fascinating execution of the ‘Droste effect’ of picture within picture, narrative within narrative.

The Rio of “The City in Crimson Cloak” is savage, brutal, and damned. Özgür sees Rio clearly:

“A sentry every fifty meters. Commando Vermelho’s rankless soldiers, Hades’ pubescent guards…The sharp eyes of a huge bird of prey always at their back…They wear fat gold chains and watches; on their feet are sneakers the size of babies’ tombs; their Bob Marley t-shirts conceal their pistols, the keys that open up all the doors that the world has slammed in their faces. They dress like rap stars, they strut like Hollywood gangsters, and they die like flies.”

Her knowing and seeing, however, do nothing to protect her from the city’s insidious charm. Unable and seemingly uninterested in extracting herself, Özgür is circling the drain while the reader looks on in fascinated horror.

Erdogan’s is a novel about being an outsider, about life in a foreign land, and about the irresistible draw of danger. Her writing is lyrical and hyperbolic, her characters and scenes hellish and irredeemable. No other-worldly demons and haunts are necessary; the depths to which humanity can sink are enough to keep one up at night. “The City in Crimson Cloak” is, in the truest sense, a masterpiece of modern horror.