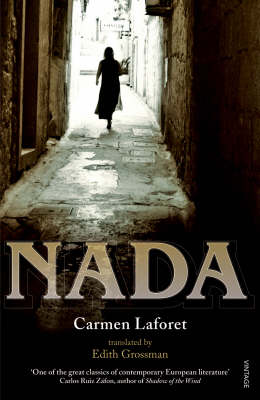 billed as gothic horror. The gothic bit is absolutely right, though to me the story’s tone was nightmarish – intangible and ethereal – rather than what I consider to be horror.

At the heart of the story, Andrea, a young adult hoping to study at the local university, moves to Barcelona to live with estranged and strange family members in near-claustrophobic circumstances. Andrea lacks real ambition, craving independence above all else. What she finds, instead, in her new home is physical and psychological ruin. Her grandmother is well-intentioned but spineless. Her aunt is manipulative and cruel. One uncle is violent and abusive, while the other is manipulative and likely predatory. Everyone has a tempestuous and tenuous hold on sanity.

“‘Cities, my child, are hell. And in all of Spain no city resembles hell more than Barcelona.'”

Barcelona, like her family, is full of dark corners and unchecked decay, and Andrea is captivated. When at home, she is irresistibly drawn to her vile, hateful, and likely insane family members, “[f]eeling for the first time, even without understanding it, that the interest and esteem a person may inspire are two things that aren’t always connected.” She spends her nights wandering aimlessly through town; “Nothing could calm and astound my imagination like that Gothic city sinking among damp houses built without style in the midst of those venerable stones, but which the years had also covered with a patina of unique charm, as if they had been infected by beauty.”

“Nada” was an interesting foray for me into Spanish Gothic story-telling. Laforet demonstrated a deft hand at creating a lightless, lifeless environment. The story itself, however, sometimes lost my interest and often disappointed. Where I expected tension and crescendo, the story sometimes felt flat or even forced. These moments, which I perceived as shortcomings, fueled the nightmarish, intangible, non-linear feeling I got from the book, so perhaps they were the author’s intent. Regardless, the novel was quickly read and soon shaken off, like waking from a night of bad but not terror-filled dreams.