Set between 1843 and 1853 and driven by the feverish clamor of the gold rush, “Daughter of Fortune” is an historical novel full of hardship and hard-headedness. Born in obscurity and left in a bin in the garden, Eliza is taken in by siblings Rose and 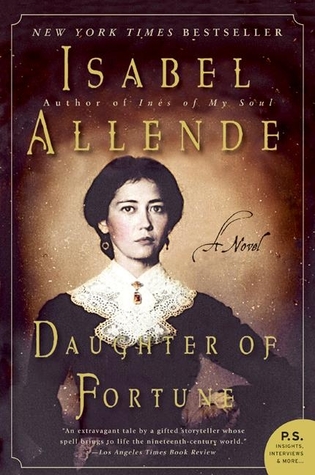 Jeremy Sommers, English expatriates in Valparaiso, Chile. While Jeremy is the distant patriarch of this unusual family, Rose vacillates between acting the mother figure and unreliable mentor to young Eliza. Yet Eliza grows up to be more like the true Rose than anyone ever suspects.

Rose, though self-quarantined and a confirmed “spinster” (what an awful term), is at heart a feminist and no shrinking violet.

“She herself could not see the advantages of marriage; a wife was the husband’s property, with fewer rights than those of a servant or child; on the other hand, a woman alone and without a fortune was at the mercy of the worst abuses. A married woman, if she was clever, could at least manage her husband, and with a bit of luck could even be widowed young.”

Though she preaches restraint, Rose is often unable to hold her tongue, as happens when Rose gets into a delightful and all-too-brief sparring match at one of her infamous afternoon gatherings when her gentlemen guests blithely espouse misogyny.

“‘I understand that in England [chloroform] is sometimes employed in obstetric practice. Did not Queen Victoria use it?’ Todd added, merely to have something to say, since he knew nothing about the subject.

‘Here we encounter major opposition on the part of the Catholics. The biblical curse on women is that they bring forth children with pain, Mr. Todd.’

‘Does that not seem unjust, gentlemen? Man’s curse is to toil with the sweat of his brow, but the men in this room – without having to go any farther – earn their living from the sweat of others’ brows,’ Miss Rose rejoined, turning red as a beet.”

Rose’s ingenue Eliza, though quietly biding her time in childhood, internalizes Rose’s vitality and strength. As a teenager Eliza believes she is rebelling against Miss Rose when in truth she is living out Rose’s long-abandoned dreams.

“Everyone is born with some special talent, and Eliza Sommers discovered early on that she had two: a good sense of smell and a good memory. She used the first to earn a living and the second to recall her life – if not in precise detail, at least with an astrologer’s poetic vagueness. The things we forget may as well never have happened, but she had many memories, both real and illusory, and that was like living twice.”

Guided by her memories and her sense of smell, Eliza forges an unusual path for herself. She spends years in disguise as a man, simultaneously free in a masculine world while bound by her secret. Just like Rose, Eliza Sommers is a woman whose femininity is under wraps while her feminine strength is a force to be reckoned with.

Isabel Allende is a heavyweight prize-fighter in the arena of literary fiction and feminist story-telling. In “Daughter of Fortune” Allende carves with bold and daring strokes, shaping a protagonist who is statuesque in her solidity, strength, and three-dimensionality. A great read from an undisputed master.