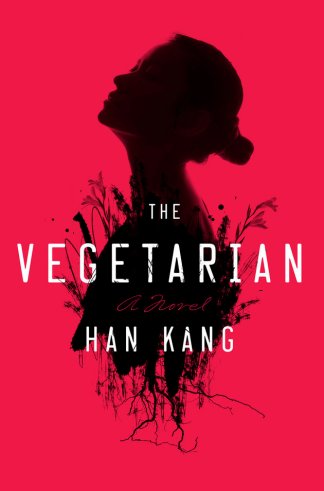 I’m always hungry (pun intended) for greater diversity in the cultures and languages represented in my reading. The Man Booker International Prize, which celebrates works of fiction written in languages other than English, is a great source for vetted works from other cultures. This year the coveted prize went to Han Kang’s “The Vegetarian”, which quickly found itself on my to be read stack.

“The Vegetarian” is the story of Yeong-hye, a Korean woman  who is seemingly invisible to her family, shapeless and voiceless until she suddenly announces her intent to convert – immediately – to vegetarianism. Yeong-hye has a prophetic dream, one in which she feels transformed by the violence, the savagery of eating meat. Her action is extreme, her rejection of all animal products total, and her reaction to others eating meat is visceral.

“Yells and howls, threaded together layer upon layer, are enmeshed to form that lump. Because of meat. I ate too much meat. The lives of the animals I ate have all lodged there. Blood and flesh, all those butchered bodies are scattered in every nook and cranny, and though the physical remnants were excreted, their lives still stick stubbornly to my insides.”

For Yeong-hye, her lifetime of eating meat is a crime she wants desperately to atone for, a wrong she can’t seem to right. Her guilt, her anguish torment her beyond rationality; arguably, they ultimately drive her insane.

As a vegetarian myself for more than two decades, I felt defensive at times throughout this novel. Yeong-hye’s intolerance and extremity felt like an affront to calmer, more rational vegetarians. I believe that the extremity of her views and actions was necessary to the plot, but the extent to which she becomes irrational and self-injurious is still hard to bear. It’s like Don Quixote’s tilting at the windmills as a result of too much reading. Hard to tolerate a virtue, an ethic that you hold at your core being turned into a vice.

I found it utterly fascinating that the story is told from multiple first person points of view, but the protagonist’s own voice is shared only in abbreviated dream sequences, never narration. Strange, too, that two of the three narrators are men and, what’s more, men who see Yeong-hye as an object. For a book written by a woman about a woman who is voiceless, that rankled a bit, though I suspect it, too, was a deliberate device to emphasize Yeong-hye’s complete disempowerment.

Yeong-hye’s husband, the first narrator in the novel, is a self-professed “settler”; he settles for the easy, the unremarkable, the mundane.

“I’ve always inclined toward the middle course in life. At school I chose to boss around those who were two or three years my junior, and with whom I could act the ringleader, rather than take my chances with those my own age, and later I chose which college to apply to based on my chances of obtaining a scholarship large enough for my needs. Ultimately, I settled for a job where I would be provided with a decent monthly salary in return for diligently carrying out my allotted tasks, at a company whose small size meant they would value my unremarkable skills. And so it was only natural that I would marry the most run-of-the-mill woman in the world.”

His reaction to Yeong-hye’s passive resistance and her slow descent into madness is as clinical and calculated as he is.

“As far as I was concerned, the only reasonable grounds for altering one’s eating habits were the desire to lose weight, an attempt to alleviate certain physical ailments, being possessed by an evil spirit, or having your sleep disturbed by indigestion. In any other case, it was nothing but sheer obstinacy for a wife to go against her husband’s wishes as mine had done.”

Han Kang’s story is about the utter transformation of a woman, from the demurring wife to the rabid moralist to a guilt-ridden naturalist who wishes to shed her humanity completely. It is a tale of obsession, culture, and mental illness, full of triggers and nightmarish passages set to affect even the most carefully guarded reader. Unfortunately, though, given the topics of dreams, sex, art, morals, and life itself,  Kang’s tone felt incongruous at times. Often cold and withdrawn, it lacked the passion and color that I felt the story demanded. By keeping Yeong-hye in the third person and burdening her with the overlaid judgements and biases of her narrators – those who are meant to know her best – Kang ensures that the readers, too, will be left unable to truly see Yeong-hye. The reader is kept at arms length to an extent that diminished the book’s impact. In spite of this criticism, however, “The Vegetarian” is a complicated and well composed read, and one in which the Man Booker International Prize committee saw great value.