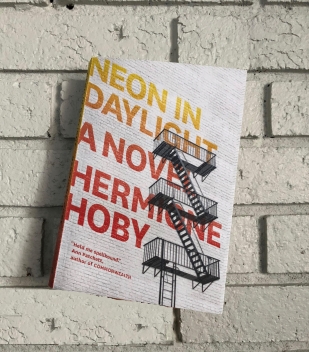 accumulated were views from a distance. That it was a place best seen from bridges and water and sky. How might you do that with a person? Specifically: yourself. To find an aerial view of your own being. To reach the kind of vantage from with you might properly survey what had been built, what was under construction, to gain a sense of the contours of the thing. To see where the damn bridges went. The lie of the land, they said, and yes, it was a kind of lie. Because this view, she knew, this lovely hazy morning vision, denied all the bloodstreams of traffic down there. It couldn’t tell you the way cabs’ side mirrors flashed reflections of fast-walking bodies and street crossings, the way the image of those bodies was doubled again in the mirrored planes of buildings. This was being, too, all the quick currents and charges, synapse flares, unmappable.”

Hermione Hoby’s debut novel is peopled by the type of fierce individuals we come to
expect and often romanticize when pondering the “big city.” Kate is a graduate student from England taking a vacation of undetermined length from her life, cat-sitting in New York City and to trying to figure out what’s next, alternately embracing and eschewing the flotsam and flow of the city around her.

“As a kid she’d had nightmares of witches. She would wake up and smell them on her pillow, a sour yellow reek. Loneliness, too, had a smell, she thought, and it was almost the same, that witchy reek. As she walked out into the world she feared she was trailing it behind her.”

“People talked about how perfect Manhattan was for walking. The grid system! they said. Its simplicity! But it was the simplicity that stymied her, the rigid right angles that quashed the art of wandering by demanding of you the exactitude, the confidence and conviction, of knowing when to turn right and when to keep going.”

Then there is Inez, a try-everything, fear-nothing teenager with a firm grip on New York City and her sense of self, a young woman whose beauty and sense of indestructibility have her operating in her own reality.

“When Inez was twelve or thirteen, he had begun to hope the hope of most fathers of daughters: that she might be beautiful enough for the world to smooth her way, but not so beautiful that her beauty might become a morally compromising force. Her cheekbones began to sharpen, her limbs to lengthen, and he’d felt an inadmissible dread.”

Finally there is Bill, a bit of a has-been writer sailing along on the winds of his one and only novel from decades before, utterly lost and adrift, unable to deal with his, or anyone else’s, emotions.

“‘Are you okay?’ he asked.
The question was so stupid, but what else do you say? As she nodded, her face crumpled with the lie of it and she shrank into a chair. For a moment, he thought she was having some kind of seizure, and his mind scrambled. Epilepsy? Peanut allergy? Am I meant to have one of those insulin pens? And then, ah, it was only this: emotion. Not a thing you stabbed and stopped with a pen.
He drew out the chair beside her very gently, and sat down very slowly, like she was a wild animal.
‘I’ve just smoked my last cigarette,’ he said, very quietly, ‘or I’d offer you one.’
She shook her head, a sobbing half laugh escaping.”

“Neon in Daylight” is a crisp character novel, full of sharp edges, barbed wit, and lacerating choices. Hoby’s characters are a little bit tragic, quite a bit flawed, and deeply mesmerizing. Their loneliness, their chaos, and their self-destruction are irresistible. Hermione Hoby writes with confidence and charisma, and her debut is a quirky treasure, a glorious, unapologetic snapshot of one slice of today’s city life.

Thank you to Catapult for providing a complimentary Advance Reader Copy in exchange for a fair and honest review. “Neon in Daylight” will be published in the US by Catapult on January 9, 2018.

1 thought on ““Neon in Daylight” by Hermione Hoby”